Home / About Us / About Cajon Drums

Cajon drum box is a six-sided box used as a hand percussion musical instrument. Cajon is originated from Peru, South America. It is played by hitting its faceplate to create sounds. The percussion player can sit on top of the Cajon drum box and play the front plate using their bare hands to create tones. The Cajon drum is slowly gaining its popularity throughout the world. Nowadays, Cajon technology has improved and even some manufacturers have added electronic devices to the Cajon drum box. Bali Treasures Drum Factory is a worldwide supplier to the biggest brands and has innovated Cajon’s that can produce nice strong bass tones.

Cajon’s are gaining good popularity since the 1970s when Peruvian composer and Cajon master Caitro Soto introduced the Cajon drum to a Spanish guitarist. Since then the Cajon drum has been incorporated into many styles of music, namely modern rock, hip hop music, and modern alternative music. The improved use of the Cajon can be combined with kick pedals, hi-hat pedals, and double bass pedal.

Now a day the Cajon drum has developed in shapes and sizes. The slightly slid faceplate Cajon is manufactured by many Cajon manufacturers. The bigger size Cajon is capable of making bigger bass tones, while the smaller one is more liked by percussionists who prefer more midbass tones. Originated from Peru, this versatile musical instrument has carried out a prominent role in music history. Its flexibility to blend with many music genres all over the world has paved its way to be the fastest-growing percussion instrument. Cajon drum now appears to be one of the most favorable and accessible drums in the world as it becomes a very significant instrument addition to any type of music.

The Cajon drum originally has a simple design, yet it is one of the most well-built and powerful percussion instruments because it is a bass drum, snare, and seat all in one convenient package. The history of how this Peruvian instrument was invented gives a well-fortified bound with African musical culture. Over the years, various cultures have been using the hand drum for their traditional music but it has also become well-known to other musicians.

How To Play A Cajon Drum

The Cajon drum box is made from Plywood and or hardwoods that you can sit and play on. You sit in a position so that your hand can play the faceplate front side and the other side that has a hole facing backward. Your feet should be resting flat on the floor. The bass tone is generated when you hit the faceplate 4-6 inches down from the top of the front face in the middle. This area is far enough to allow the face to resonate & create a solid, focused and punchy bass tone. It should be easy to reach that part of the drum.

You should try and experience which part creates the best bass tones if you move to the side the tone will be different. The mid-tone is produced when your finger hits 3 inches down from the top of the faceplate. You can hear the mid-tone clearly when you hit the area correctly. Normally the side creates more of snare like sound. The third tone is the high tone. The high tone is created when your fingers hit the top edge of the faceplate.

By hitting the top edge of the faceplate the faceplate will vibrate less hence creates the high tone. After knowing how to play this drum, next is practicing to master the rhythms.

The Cajon drum allows the player to achieve a different pitch by having several striking zones. Which part of the hand you use to hit the face plate can vary the pitch of the note that is produced. The edge of the drum box which produces a higher pitched tone, bear semblance to a snare drum in a traditional drum kit. If you move to the center of the front plate, which the lower pitched tone is produced, it will resemble a bass drum sound.

The simplicity that Cajon drums have makes them very simple and easy to use whether by people who have no experience or by a skilled drummer. Its simple and convenient design and shape allow for easy transportation and storage.

The Cajon drum box is made from hardwood for its construction, plywood and thin plywood to be attached to the face-plate. It is very important to use a controlled water content wood to build the drum. First our R&D dept. will confirm the design and sizes of the new Cajon drum.

The box construction wood has to be cut in precise lengths & designs. It is important that our drum box can also be sold to overweight adults. The next step is to attach the plywood to the sides of the instrument. The plywood attachments have to be done precisely so that there will be no air gap between the sides. This is very important to maintain the sound production and aesthetics of these hand drums. 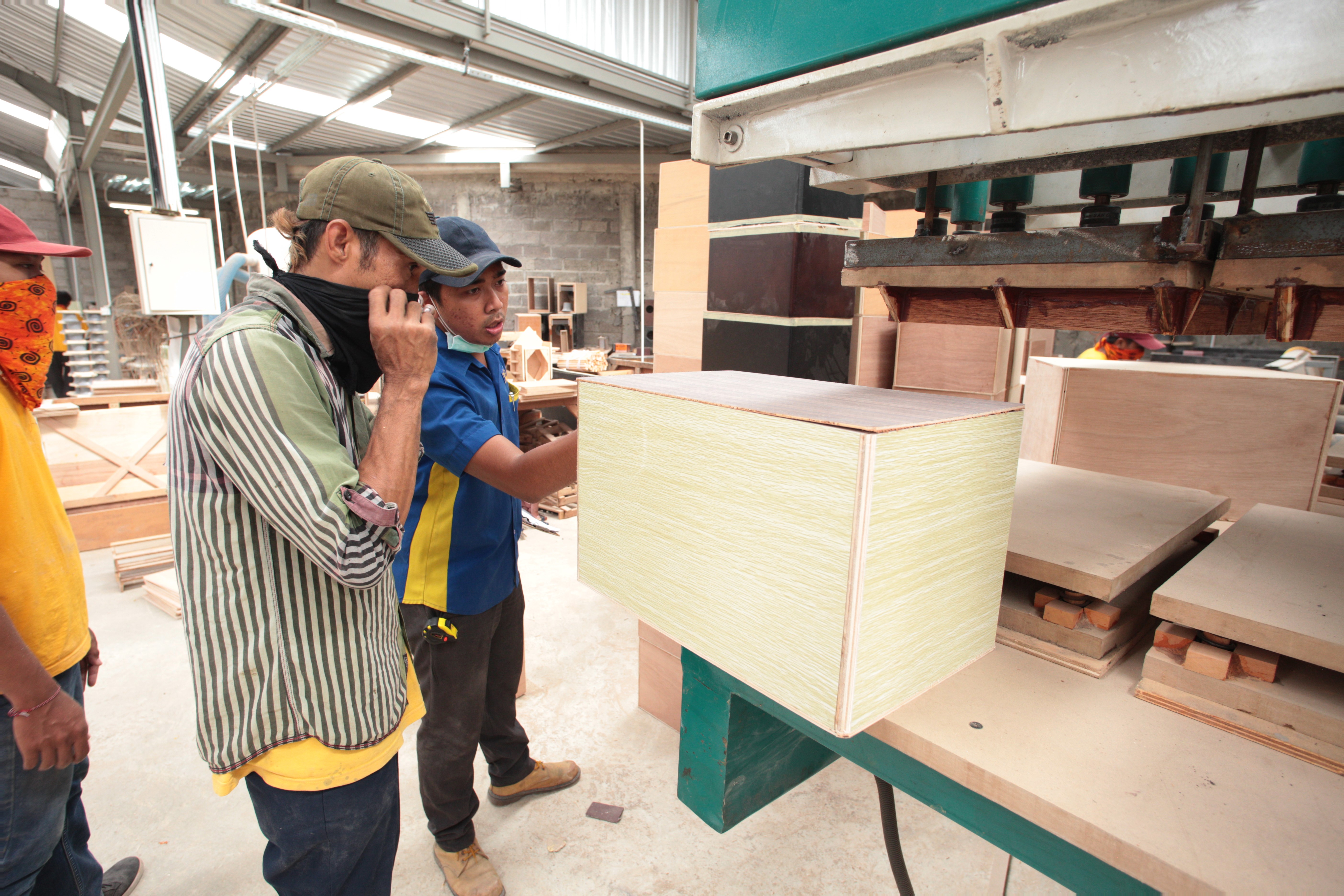 The inside of the front face-plate is attached with a snare, string or jingle. The purpose is to add rattling sounds to the instrument when the face-plate is hit by the player. The opposite side of the face-plate has a hole in it that allows the flow of air. Our Peruvian drum can be finished with many patterns and colors to fulfill market demand.

One of the essential factors in making a good musical instrument is the quality of the materials. The material used to make a Cajon drum must be free from any visible defects and stored with proper conditions.

The History Of Cajon Drums

The Cajon is a simple 6-sided drum box that has a front plate to be played and another opposite side that has a porthole. The Cajon is usually made from plywood and the faceplate that is made from thinner plywood. The Cajon drum box was originated from Peru, South America, in the 16th century. Originally, the African slaves were creating this musical instrument from packing crates and use them to replace their old style drums. The word Cajon means box or drawer in Spanish and Cajon is found as a major player in Spanish Flamenco music.

Over the years, Cajons have developed and people are making extra additions to this musical instrument. The addition of snares added another dimension and experience to Cajon drum playing. Since then many snare styles have been developed to add the fun of the Cajon drumming. Modern Cajon drums have even more additions such as strings a bass port and pick-ups to enhance the tones amplifications. The spirit of the Cajon is the spirit of the music. Such a simple musical instrument that is able to bring together simple beats to complex beats of music. The history of Cajon drum is symbolizing how at that tough time, African slaves were longing for their independence and their human rights. They were craving to be treated like how they are supposed to be. The invention of this six-sided musical instrument emphasizes their awareness of human rights as they realized how painful the suppression was.

Modern Evolution of The Cajon Drum

In the 19th century, the Cajon was introduced to people all around the world and reached its peak of popularity. In recent time, most of the modern musicians use this hand drum in collaboration with other musical instruments and performed in many musical performances. Over the years, much evolution was experienced by the Cajon drum such as the change on the snare wires shape, and the addition of kick pedals and various accessories.

The Cajon has received much development since it was invented. At these times, guitar strings are added across the front face and the tension of these wires become easier to adjust. The other innovation is related to the resemblance of the instrument with the bass drum on the typical drum set. Bass drum pedals attached to this Peruvian drum to fulfill the drummer’s needs.

Today, electronic Cajon is introduced to make live performances better. This type of Cajon can produce an enormous range of sound combinations which makes it very helpful for live concerts and performances. A microphone can be placed in front of its speaker to generate a more deafening sound. This hand drum is also a preferred option for acoustic music performances. You can make a collaboration with a Cajon and acoustic guitar. The sound produced by this collaboration develops a relaxed and peaceful atmosphere.

There are many types of Cajon that have been developed based on various needs. A few of them are as follows:

Originally, the Cuban Cajon is designed a bit different from the other types of Cajon’s as it is designed to be held by the hand. The Cuban hand drum does not have snares and has lots of overtones. It is used mostly for Afro-Cuban music and has a more resonant sound compared to Peruvian Cajon. The edges of this Cuban drum generate higher notes while the center area generates a more bass tone. It comes in varied sizes and each size of the instrument can deliver numerous types of sounds.

The Peruvian Cajon is made from hardwood and is believed to be the oldest versions of Cajon drum as it has been used since 200 years ago. Years ago when it was invented for the first time, Peruvian Cajon wasn’t able to produce a refined song and was not strong enough. Yet, after various evolutions and developments in the design over time, this type of drum box is now used by a lot of musicians. It can even be said that Peruvian instrument is now one of the most used types of Cajons in the world. Peruvian drum box originally does not contain any snare system but it creates a better sound for musicians.

Flamenco Cajon is known as one of the most famous types of Cajon that are used today. This type of Cajon drum is made by plywood, so it produces good sound. As time passed, Flamenco Cajon experienced many developments and become better compared to the old model. The new development of Flamenco hand drum allows you to control or adjust the snare accordingly. This Type of Cajon drum essentially has a very good ratio of strength to weight. Since the past few years, it also has many other innovations like diffusers for interior sound, the adjustable and controlled snare response, round corners, and so on.

The snare Cajon is one of the most used Cajon drums in the world and one of the most modern versions of the Cajon that you can find in the market. Today, there is a wide variety of snare Cajon drums that are available in the market. You can find the snare Cajon drum that has an adjustable snare system which allows you to on and off the snare system while you are playing it. The player can enjoy the good snare in it while playing. In this recent time, this snare drum box can be titled as the trendiest and the most used Cajon all over the world. 90% of Cajon’s that are available in the market today are considered to be this type. Some type of snare mechanism is fitted to create a snare effect on the upper side of the tapa.

This type of Cajon drum is one of the modern developments of Cajon nowadays. It is made by the two most common and simple ways. One of the ways is by combining together two Cuban hand drums, while the other method of construction includes a trapezium-shaped play surface. The box has two different areas which have a different and unique pitch.