Brief intro to the Hand Drum

Home / About Us / Brief intro to the Hand Drum

Most of the cultures all over the world predominantly African culture are extremely familiar with drums. In the long ago that period of time, the shape of the hand drum is not as advanced as drums we can find today. Yet, the sound produced by this instrument remains incredible whether in the past or in this present time.

Back thentheAfricans used the hand drum for music at sacred rituals and ceremonies. It is used to accompany their dance in various traditional gatherings. The hand drum was also used to give instructions to troops on the battlefield. Hand drums are bound by a tight bond with African culture and many other cultures all around the world, and it is believed to have a noble symbolism and philosophy of life. It is stated that hand drums have also been used for healing powers for years. 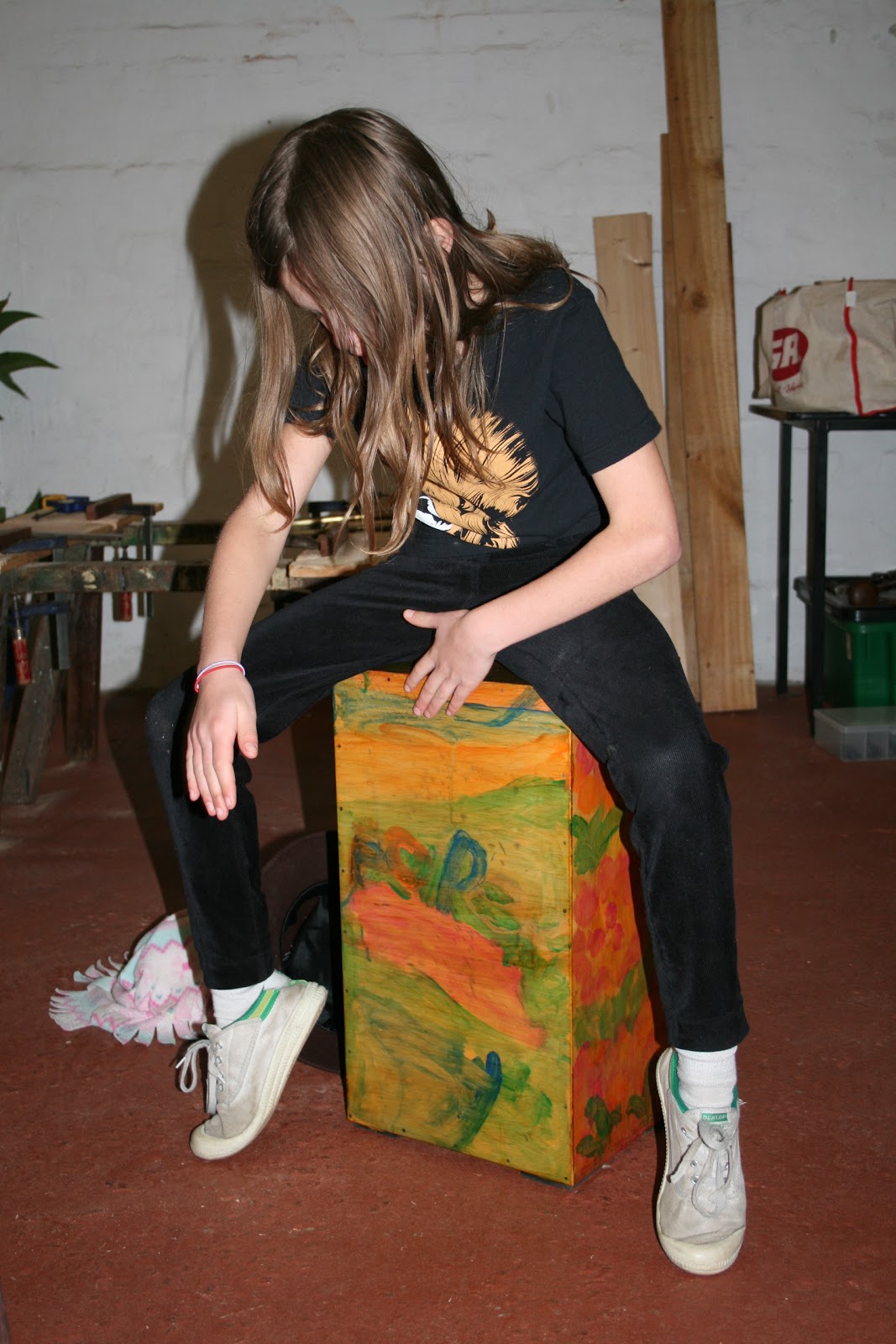 Because music genres grow tremendously fast, the evolution of each hand drum is enhanced, a more advanced hand drum always emerges over time. There is a large number of high-quality hand drums you can find in the market today.

Among the various hand drums from many countries, African hand drums typically have some of the most exquisite and unique designs. Their paintings, musical instruments, and their other artworks are related to African ancient history. As follows, the hand drum is one of the most precious historical items to the African people.

How To Play Hand Drums

Cajon drum itself is played by sitting comfortably on the top of the drum and hitting the front faceplate with various slapping/stroking techniques. This hand drum is able to generate diverse tones which are a bass tone, high tone, and mid tone. 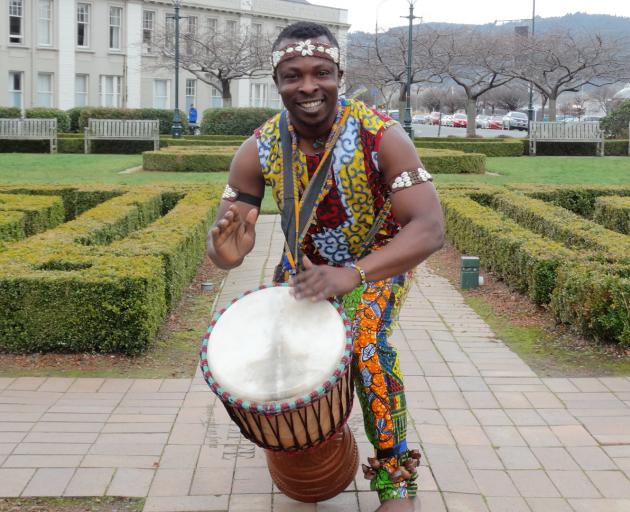 Playing Doumbek drum also requires different playing techniques to create three major sounds which are Doum, Tek, and Ka. The Doum sound is generated by tapping the drum head by four of your fingers and lifting them quickly. The Tek sound is created by tapping this hand drum using one or two fingers and quickly lift them up. While the Ka sound is created by placing the arm across the drum and hitting the drum head.

There are some essential points to remember when you decided to learn to play hand drums. As playing hand drums required an intense physical motion, warming up is an important thing to do before you start playing. You can do some hand stretches techniques to enhance the blood circulations. You also have to focus on the tone that you create with your drum so you can get the sound that you desire.

The production process of hand drums is varied and depends on the type of hand drum that is produced. All the productions undoubtedly require high-quality materials, the right tools, and the experience of the worker.

Hand drums are commonly made of woods and animal skin for the drum head. Yet, Drum Factory also provides PVC frame drums in various sizes. The PVC drum shell is a substitute for a wood drum shell and the tones created are in semblance with tones of the wooden drum shell. 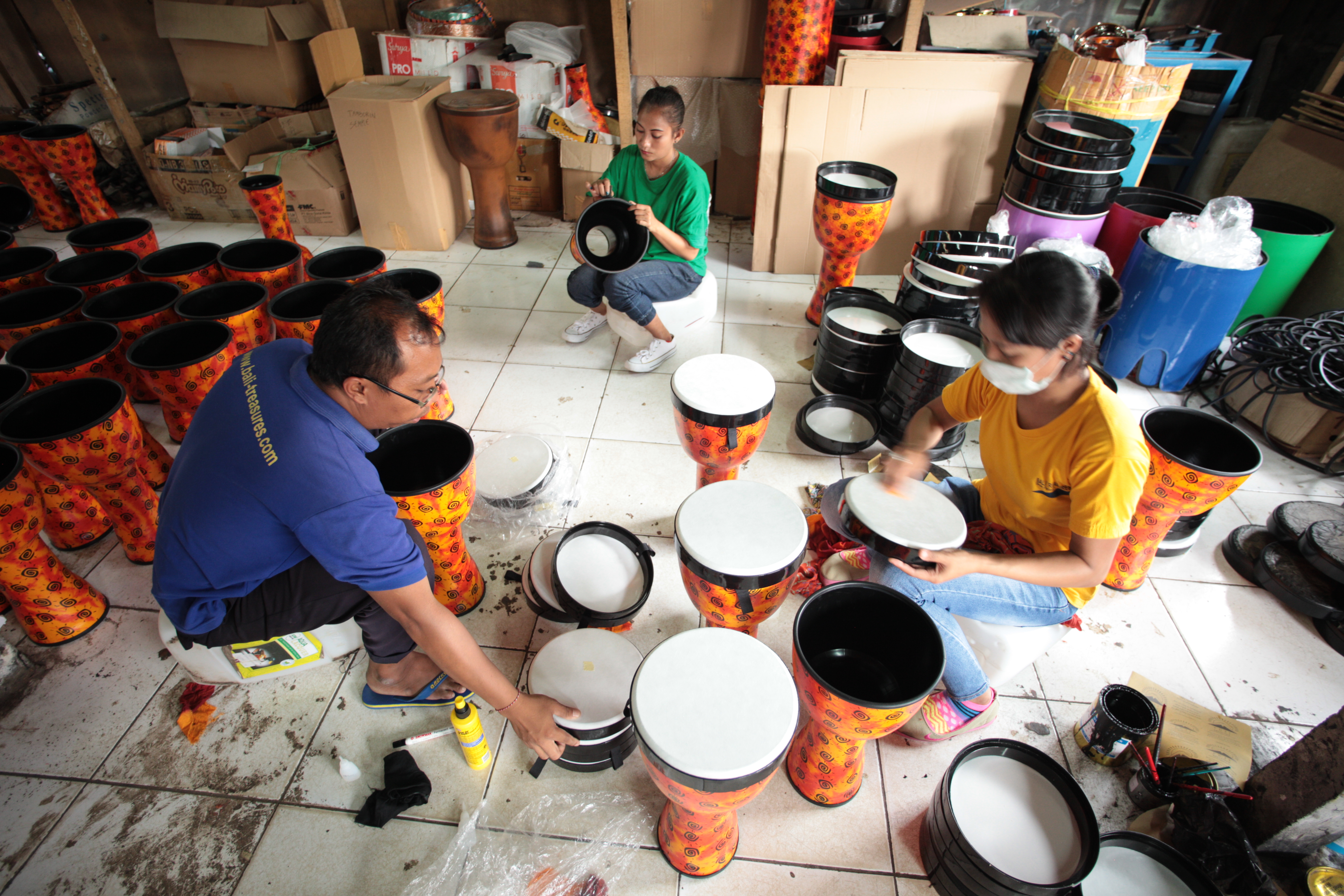 Djembe with a wooden shell is typically made from logwood. The logwood is cut according to the size of the Djembe drum that is going to be made then peeled with a machine. The wood then carved by hands soaked in pesticide liquid to eradicate bugs in the wood.  Goatskin is then attached to the shell as a drum head.

Hand drums are essentially made up of different kind of woods. The Cajon drum is made from hardwood and plywood.  The hardwood is cut to make the construction that is assembled into a box-shaped structure. The plywood is then attached to the sides of this hand drum without any air gaps.

The History of Hand Drums

The drum is known as the oldest musical instrument that has been used by mankind over centuries. It is commonly used by pretty much every culture throughout the world for sacred rituals and ceremonies. This musical instrument that was invented specifically before 6000 BC is mostly used in the Middle East, Africa, and Asia. Yet, it has reached its popularity in Europe when the invasion of Europe to Africa occurred.

The popularity of the hand drum began to approach Europe along with the crusades that returned from war. The military used drums emulated by European armies and after the war ended, they introduced drums as instruments to the European people. Thenceforth, the popularity of drums has spread widely around Europe and used in European music. It is used widely in classical orchestra performances and folklore music as a rhythmic beat. 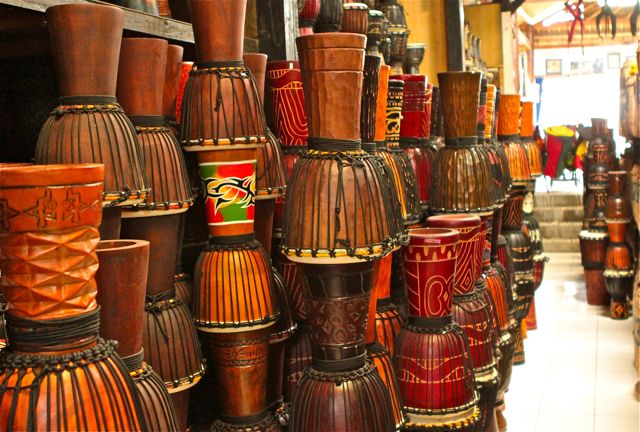 In the 16th century when Europe tried to conquer America, hand drums attain its popularity even wider.  At that period, the suppression of slavery occurred and the African slaves were brought and made European, African, and American cultures intertwined. The African slaves were longing for that part of their life when they were still able to play music, as it is extremely meaningful to them. The African slaves then created a hand drum with simple materials that were close to them so they could play music like they used to.

As time passed, the better hand drums started to be created along with the advancement of technology. The Hand drum evolved throughout the years but the shape remains the same with the previous version. In recent times, hand drums with various designs and sizes emerge and can be easily found in the market.

There are various types of hand drums that are originated from different countries. Those are as follows:

Originated from Africa, Conga drum is a single head drum instrument that is known as one of the most popular Latin hand drums. It is made of wood stave as the construction and calfskin as the drum head. Developed and advanced in Cuba, the conga has been used for various rituals and cultural celebrations in Cuba and Puerto Rico. The popularity of this hand drum began when it was starting to be a part of Cuban music and enhanced even more in the 1930s. At that period, Conga found its way to become popular all over the U.S. along with Latin music. Along with the rapid growth of technology, Conga is made of fiberglass shells and a synthetic drum head. In the recent period, this hand drum instrument has been very well-known all over the world, mostly in America. After the slave trade and cultural blend, Conga today is used in various styles of music including Afro Caribbean, South American, Rumba, Salsa, and Latin music. Before the development of Conga happened, the players of the Congaor commonly called the Congueros, generally played only one single drum. Yet, after Congadrumreceived some advancement in the tuning systems with lugs and bolts and made of synthetic materials, it is now played as a set with two to four Congas. 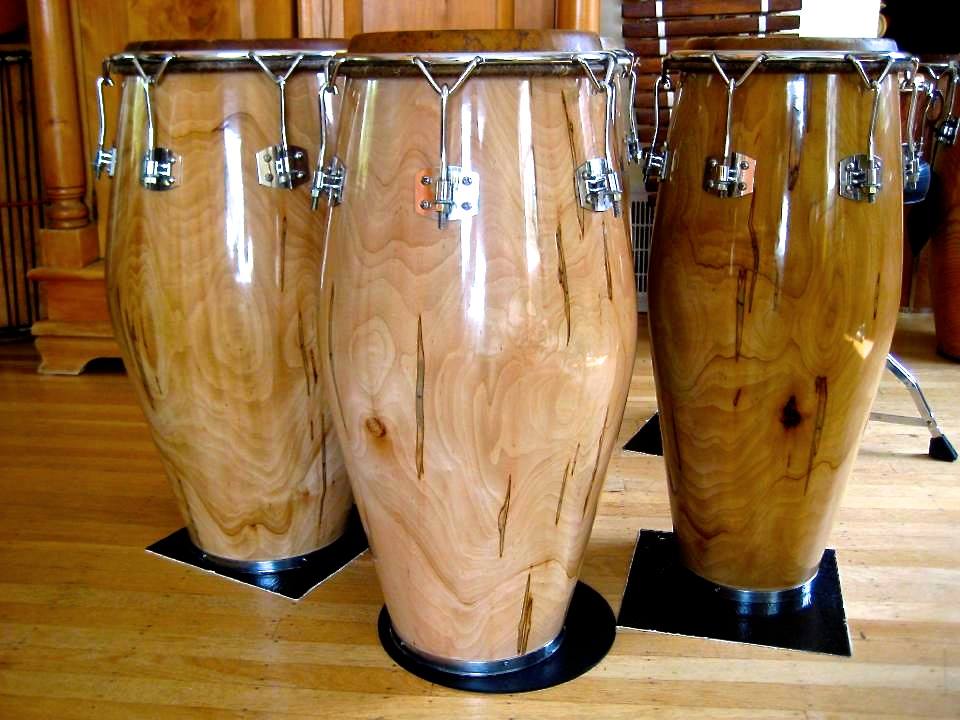 Bongo drums or Bongos are a pair of small Afro-Cuban drums that attached together which are different in size. The larger drum (hembra) and the smaller drum (macho) generate a different sound. Bongo drum was invented in Cuba and became extremely popular in Cuban music around the late 1800s. Bongo drums are believed to be brought to South America by African slaves. The Afro-Cuban musical group played the drums that are called bonko and influenced the creation of the Bongo in South American. The bonkos looks alike with Bongos and they are however played in Cuba until today. Prior to the 1940s, the bongo drum skin was commonly tuned using heat but later the tuning lugs were added to the bongo which made it possible to be tuned without heat. In the early of the 20th century, popular dance music and jazz was highly influenced by Afro-Caribbean rhythms and naturally made Bongo drums stealing people’s attention worldwide. Today, Bongo drum become one of the world’s most common hand drum. 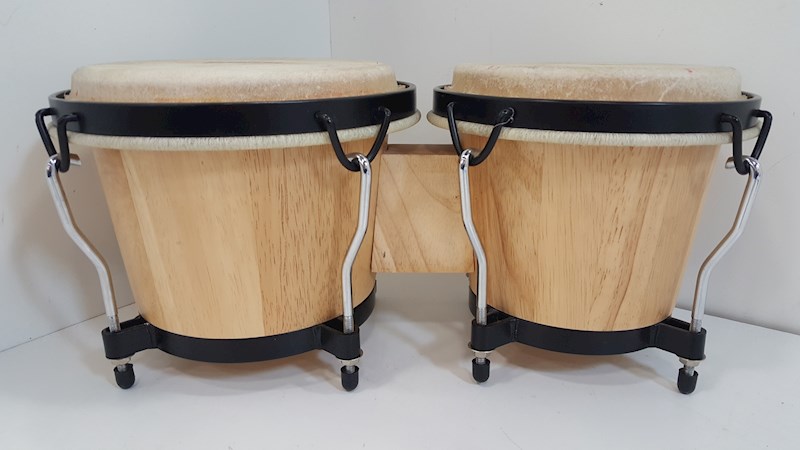 The Djembe drum is a 6-sided drum box instrument originated from Africa that is extremely popular in various types of music today. The Djembe drum is capable to generate a distinctive sound using fingers or palms. It can create varied tones when the player strokes it in the different skin areas. The hand drum can generate a loud sound which is extremely pleasant to use in live musical performances. The Djembe drum was originally made from wood that has been carved traditionally by the maker. Yet, after years with the advancement of technology, Djembe is mostly made by machines and no longer carved traditionally. The color of the Djembe hand drum was usually dark brown or black but today you can find it in various colors as it has become more popular worldwide. The size of the drum is typically around 30 to 65 cm. The drum head which produces sound and vibration is made of calfskin or goatskin. In this modern era, the drum skin can be produced by synthetic materials as well. 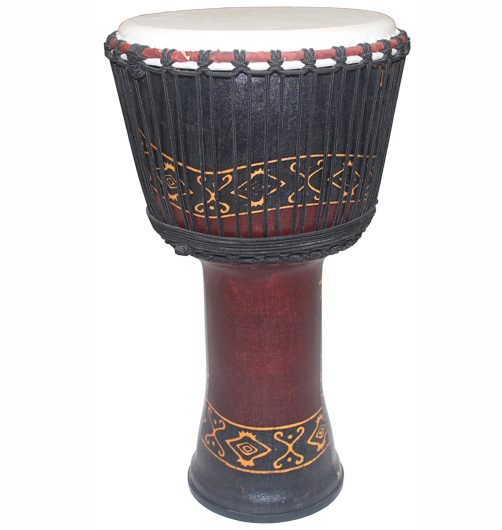 Doumbek (Darbuka) is an African goblet-shaped musical instrument originated from Egypt. This is one of the famous hand drums in Africa and the Middle East, and the rhythms played in Doumbek influenced by their culture. The Doumbek is used in most of the belly dance music with various styles. Like the other types of hand drums, the drum head of Doumbek is made of animal skin such as goatskin and a modern synthetic skin as well. Doumbek is played predominantly inNorth Africa, Turkey, and in Eastern Europe. It has a distinctive playing style and unique rhythms that make it sound good. 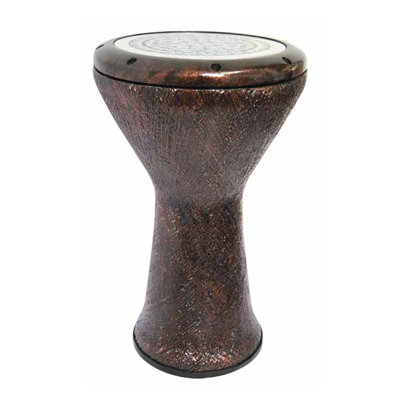 Cajon is a versatile drum instrument that is widely used in modern music today. Originated from Peru, it can produce different types of tones with different types of strokes.  The structure of the Cajon is made of hardwood, and the faceplate is made of plywood. It is played by hitting the face plate using various techniques. This hand drum has been a favorable drum that is played by many music styles from hip-hop to modern alternative music. It is used mostly in acoustic music performance because of the versatility. It was originated from Peru but was invented by the African slaves during the slave trade period. They made this musical instrument from the wood crates and played it while sitting on the instrument. Just like the other musical instruments, the Cajondrumalso received some advancement as time passed. The size of this drum is relatively small, so it is very convenient to be carried around by the musicians. This is one of the reasons why Cajon is very favored hand drum by musicians all over the world.