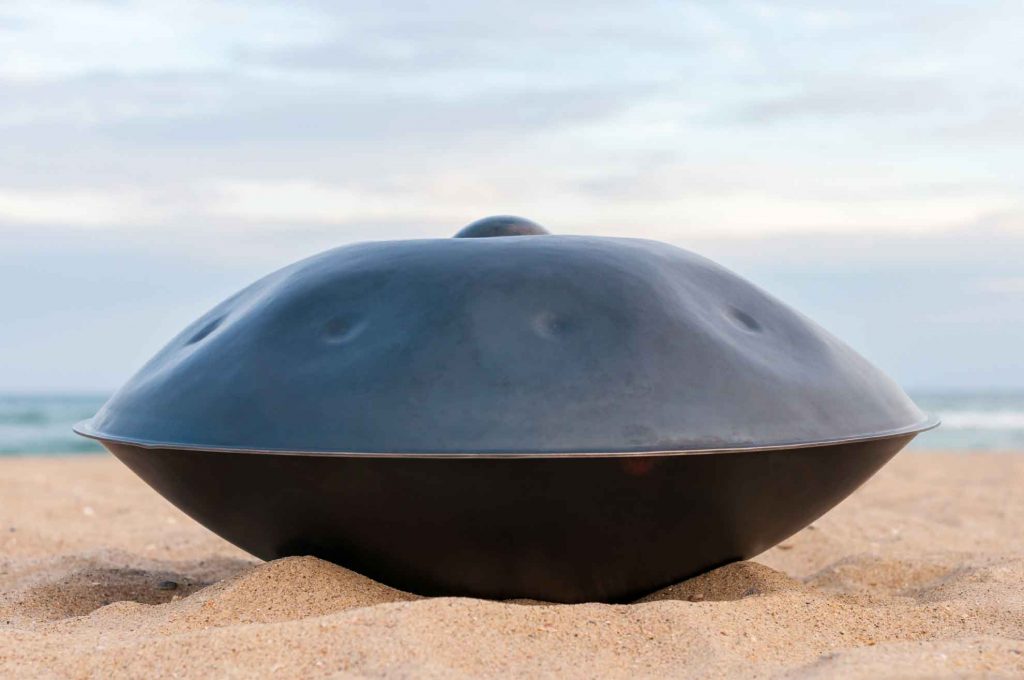 The handpan is tuned to a distinctive scale such as major, harmonic minor, natural minor, Mixolydian, etc., and is played by hands. This instrument is able to produce diverse layers of sound and ethereal effects. The tuned hole in the bottom shell that is commonly called “port” or “gu” by the builders can create a playable Helmholtz like an udu drum. In recent years since it was developed, many handpan makers and brands have emerged as a result of a growing interest from people around the world.

How To Play a Handpan

Even though handpan musical instrument is known as an intuitive instrument and people are able to play it without any musical training, it is important to have knowledge in music theories. In order to know how to develop chords, how to play with other musicians or how scales work, having a glimpse of understanding in music theory is essential. The handpan is generally played by holding it on the lap and is played with a gentle touch. If this instrument is not played gently, it will result in developing bad sounds as well as interfere with the handpan tone negatively.

There is much to explore within the first time trying to play a handpan and it can be quite overwhelming, yet, players only need to discover a few fundamentals of handpan playing. The best handpan sound is achieved through gentle and soft touches. Therefore, learning how to hit the handpan is the most important thing to create beautiful sounds. Once players know how to do it, learning the rest of the steps is an easy thing to do. Generally, there is no particular rule in creating beautiful handpan sounds and players just need to pour their soul in their playing.

How Bali Treasures Makes A Handpan

One of the most important steps in making a handpan is hammering and to build a high-quality handpan, hundreds of hours of hammering cannot be separated from the process. The exterior shape of handpan that looks like a UFO is developed through two steel sheets of metal fastened together and completed with the hammer marks and dimples hint. There are a few steps to build a handpan and reach their unique sound.

The first step is sinking or transforming a flat steel surface into a bowl shape and two of these shaped steels that are put together will sooner or later become a handpan. The next step is heating and shaping the handpan using different tools which include hammers. The steels then are tuned and result in developing some of the most differentiation in instrument timbre. Those steels are then glued together with adhesives chosen and after the shells are joined, the instrument is re-tuned through the sound hole with a small hammer.

The History of a Handpan

The Hang, handpan or pantam is actually a modified version of a steel pan. On the other words, handpan is not a whole newly developed musical instrument. Therefore, talking about the history of handpan, it is significant to observe the process of how the steel pan is developed. Trinidad and Tobago are known as the birthplace of the steel pan. During the early 1900’s, musical instruments were banned on these islands. The local community then began their rebellious act in finding

different mediums to drum on. Some people began developing the drums to create a number of different tones on the same drum. As the production is very crucial on the island, the young Ellie Mannette who is known as the father of the modern-day steel pan, turning the oil drum into a musical instrument for years. After that, people started to bang on the oil drums following Ellie Mannette’s footprints

Later on the 70s, a musical instrument known as the Trinidad steel drum was introduced in Europe and Felix Rohner, the first or the notable Trinidad steel drum played this instrument for 20 years. Then in the year 1990, Felix Rohner builds his company that is called PanArt. This company then notably known for creating dented musical instruments and he run the company along with Sabrina Scharer who became his business partner. Later, another steel drum enthusiast namely Reto Weber met with the PanArt in India to get the knowledge in how to play the steel drum with his hands. Through this process, the handpan was invented but the name of the instrument was not at first known as the handpan. Because of the Bernese German dialect, it was called the Hang.

In recent years, there are only a few handpan makers in the world because creating handpan still quite difficult and have more complexity when compared to other instruments. Even though there are not so many handpan makers that can be discovered in the world, the market shows a high demand for this incredible musical instrument

View all posts by Drum Factory →